Twice Baked Potatoes are loaded with cheese, bacon and green onion. These potatoes are the perfect side dish for many meals!

We have now reached 100 degrees where I live, and with all honesty, I am lovin’ it! I have been looking forward to summer and it’s finally here! We have already been spending a lot of time outside swimming and enjoying the hot weather.

We went to the lake with our friends last weekend, and then yesterday the kids spent most of the day having a water fight in our front yard. Good times!

I am excited for the summer barbecues to start, so I can make these yummy Twice Baked Potatoes again. I love these things. They are so good, and really go perfect with any kind of meat you’ll be grilling up.

I’m sure most of you already know how to make these, they are ridiculously easy, but also ridiculously delicious, so I had to share the way I make them! 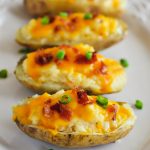